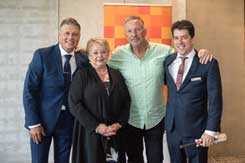 Thank you to all that attended the VDC Business Breakfast on 30 March. Judging by your attendance and feedback it was a huge success as we had the pleasure of witnessing TripleM Radio for former AFL star Michael Roberts interview Sir Ian on the ups and downs of being Captain of the English Cricket Team, being knighted by the Queen, establishing a leukaemia foundation through gruelling walks and chairing the Durham County Cricket Club. Sir Ian, or Beefy as Michael called him, retold humorous anecdotes and stories that occurred both on and off the field in all these endeavours and about knowing when to be a leader or assuming another role that you are more suited to. 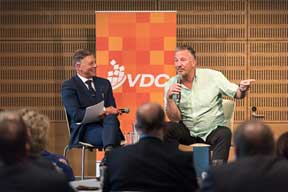 Sir Ian described how walking through a children’s hospital ward after being injured and the impact of that experience led to championing the cause of eliminating child Leukaemia. Since opening a research centre in Glasgow in the 1980s from the proceeds of a charity walk from John o’ Groats at the tip of Scotland to Lands’ End in Cornwall England, survival rates have improved from 20 percent at that to over 90 percent today, an astonishing achievement.

In regards to our government funded activities, as part of the Victorian Government’s Education State: Skills First initiative, the Department of Education and Training has provided funds to the VDC to select thirty two workforce development projects in 2017 that will enable providers to improve student outcomes. Applications for the projects closed on Friday 31 March 2017. Thank you for your overwhelming support for this initiative. We are currently assessing over 200 applications and will be advising successful applicants as soon as possible.