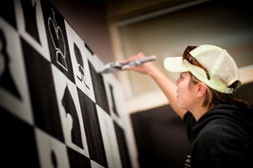 The Australian Youth Development Index gives us a handle on how young Australians are faring. There’s good news generally, and sobering news as well. The Population Clock at the Australian Bureau Statistics (ABS) has the number of people living in Australia at just over 24.1 million. Of that number, 6.3 million are 10-29 years of age – that’s a touch more than a quarter of the population. That span of 10-29 years includes that life period when children and young adults are intensively engaged with school and tertiary education. Knowing more about how this group is faring can help teachers in all sectors to shape relevant and engaging learning experiences.

The structure of the Index

The virtue of an index is that it brings together into one statistically verifiable number a raft of measures from many different data collections, and links them in ways that makes the measures comparable. For example, Domain 3: Employment & Opportunity draws on three separate measures:

In combining measures across the Domains the AYDI ranks Australia 3rd of 185 nations for youth development. That’s a high score and one we should welcome. Our ranking is unchanged since 2015. Our performance has improved across all Domains except for Health and Wellbeing which shows a 1% decline since 2010 compared to 3% increase averaged across other nations.

Variations between states and territories

But the AYDI offers more than a performance card for Australia. It also offers a performance snapshot for each state and territory, and allows for some analysis about regional variations too. A smattering of data from states and territories shows that:

Young people from rural areas are not doing as well

The variations within Australia are where we need to focus and education providers are a key first responder to making sure young Australians make a safe passage through their teens and twenties. There are two national variations that are particularly troubling and have been with us for too long.

First, there is what the AYDI report calls the Rural/Urban Divide:

The research results show stark divisions in education and employment opportunities between youth living in rural and urban areas. The NT has the most unequal opportunities for youth in rural areas, but the inequality exists across the board.
… While the situation in the NT is of concern, it is one of only two jurisdictions where youth NEET [not in employment or training] has actually decreased for both rural and urban youth since 2006 … QLD and WA have seen increases in rural and urban youth NEET, while NSW is the only state or territory where the situation for rural youth improved, although it deteriorated for urban youth.

Second, there is the gap between youth development outcomes for Aboriginal and Torres Strait Islanders and other young people living in Australia. It’s a national emergency any way you look at it. These findings are taken from the AYDI report:

We rank 3 out of 185 nations, but on at least two fronts we have a lot of work to do. Teachers will make a critical contribution to that work.